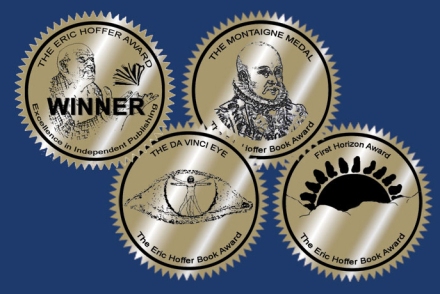 In 2007, The US Review of Books began publishing the results of the Eric Hoffer Book Award. While the US Review is blind to the actual judging process, recently the Hoffer Award opened a window in The Authority of Book Awards. Years earlier, its chairman talked about the popular award’s humble beginnings in The Eric Hoffer Award: Righting the Wrongs.

While The US Review of Books boasts over 15,000 monthly subscribers, tens of thousands of additional readers visit its on-line publication to view the results of the Eric Hoffer Book Award each spring. Let’s take a look at how the excitement and the Hoffer Award in general has enhanced the success of the authors and publishers who registered their books with one of the most popular international competitions for small, academic, and independent books.

“The Hoffer win confirmed for me that my book was what I’d hoped it would be.” – Bill Mesce, A Cold and Distant Place

“I no longer need to try to attract the attention of traditional publishers. Ever since I received this award my book has received a lot more attention. In addition, my book sales have increased greatly. Thank you very much for the big boost. My Eric Hoffer Award success has been very rewarding.” – Anthony Aquan-Assee, Second Life, Second Chance

“Being an Eric Hoffer Finalist has helped me get invited to do more readings, receive honoraria, also sell books.” – Joan Seliger Sidney, Body of Diminishing Motion

“The Eric Hoffer Award has added visibility, validation and ultimately readership. An immeasurable measure of pride accompanies the award.” – Karen Krett, The Dark Side of Hope

These success stories form the core reason why the Eric Award was created. The US Review of Books to be a sponsor of the Eric Hoffer Book Award.

The US Review of Books

US Review on Goodreads